2019 - The Year of the Snow = The year for rafting! As February comes to a close, here in Idaho we have had 300% of normal snowfall for this month.  Snowpacks in Idaho look are as good as we have seen them in a decade.  The Salmon River drainage is at almost 110% of normal and the Payette River drainage is at almost 120%.  July and August trips on the Salmon River are going to be amazing with higher water, bigger waves, and great weather.  For those looking for some high water adventure, middle and late June trips on the Riggins day section are going to be all-time! 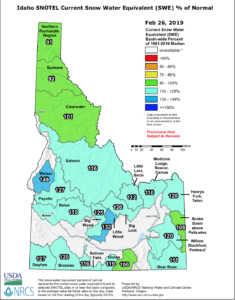 In Oregon the Rogue and Umpqua Drainages are at 106%, the Klamath drainage is 105%, the Grande Ronde is 126% and the Owyhee is at an AMAZING 127% of normal.  These are the kinds of numbers we have not seen in recent memory.  So what does all of this mean for the summer? 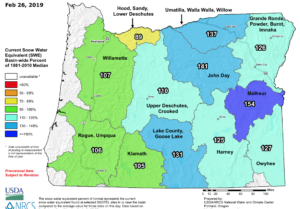 There is still plenty of time between now and and the start of the season and things could change somewhat but here are some of the things we love about a big snowpack.