With Spring around the corner, conversation around here has started to turn to snowmelt, rainfall, and the prospect of Big Water.

Definitions: What it is! 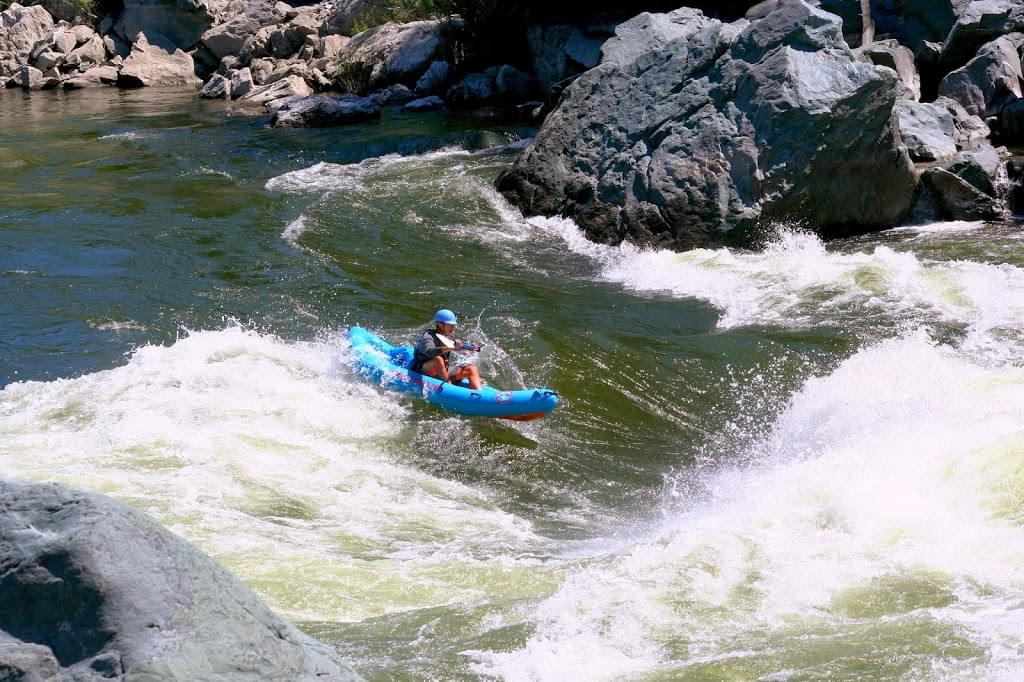 The question is: what constitutes Big Water?

Not surprisingly, there is no set criterion here--and as we've talked about this piece, the issue has turned into something of a debate among some of us here at OTT. Some of us contend that when we talk about Big Water, what we’re talking about is high volume rivers and/or comparatively higher volume runs with big rapids, waves, and holes: that is, that Big Water is a function of drainage volume (with volume, we’re simply referencing discharge or flow, that is, the amount of water passing a given point in a stream or river, usually measured in cfs, cubic-feet per second). The argument here is that there's a tipping point for big water, and that you just don't get truly BIG waves until you pass that tipping point. Those of us in this camp say that at around 10,000+ cfs, the dynamics of rapids change and function in ways that are rarely, if ever, seen in rivers with volumes less than 10,000 cfs. On the other hand, some of us would counter: (a) that a smaller volume drainage, say ~5,000 cfs, can produce similar experiences, if not exactly comparable in scale, and (b) that a river can be high-volume and still not fit the Big Water bill. To this latter point, consider the Mississippi: with an average discharge of ~ 593,000 cfs, it’s definitely a high volume river, but due to its moderate gradient and broad basin, you don’t find the big waves, holes and rapids that distinguish Big Water. The idea here is that Big Water (High Volume) is relational to the size of the drainage. One drainage might be considered High Volume at ~2500 cfs due to the narrowness of the given canyon whereas another may not produce the same-size waves until 10,000 cfs. It's an open ended debate, and ultimately, distinguishing Big Water might best be boiled down to the same famous criterion advanced by Supreme Court Justice Potter Stewart for distinguishing Hardcore Pornography: you know it when you see it.  All said, regardless of which camp one falls in, the lessons and tips offered here still apply. So [deep breath], with all necessary caveats established, when we say Big Water, we’re talking about big rapids with big, impressive features—big waves, big holes (big fun!). Here at Orange Torpedo Trips, we run three rivers that might, at certain times given certain conditions, be classified as such: (1) the Main Salmon River; (2) the Lower Salmon River, and; (3) the Ikes section of the Klamath River, the site of our annual Klamath Hotshot Season-Starter. (It should be noted that none of the three aforementioned rivers are generally or even usually in Big Water mode during the regular summer season. With these three, Big Water is more of a season, coming early on in the kayaking/rafting season when at all.)

Prescriptions: What to do! 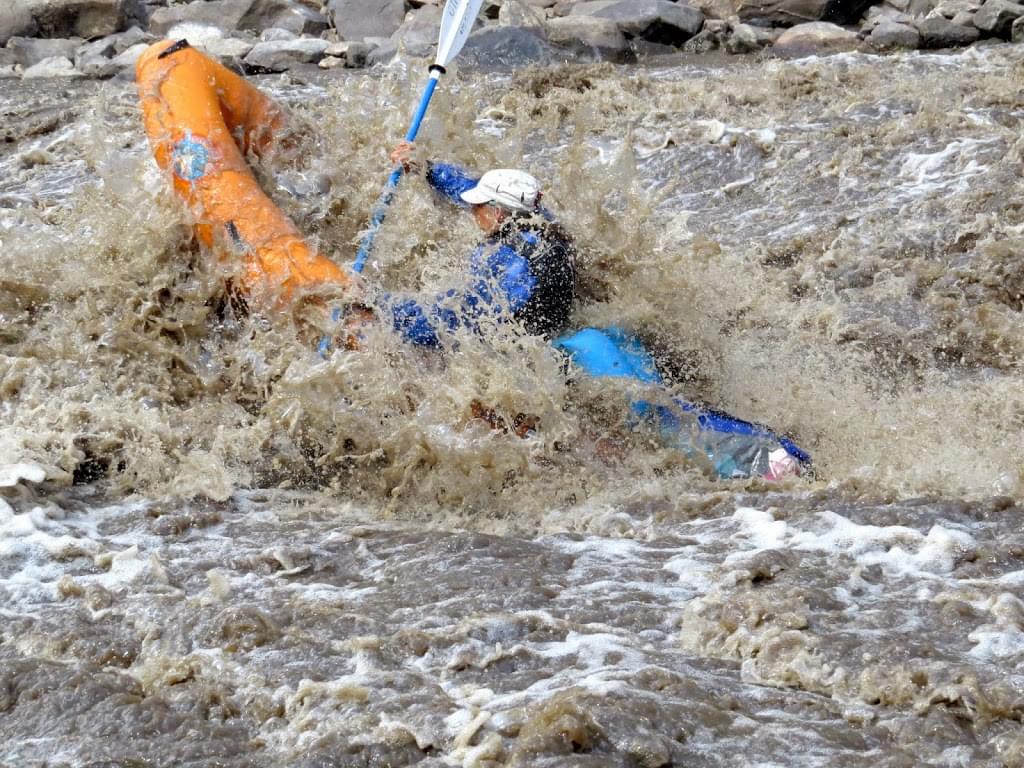 Robyn giving it on the Main Salmon

Having thus defined what Big Water is, albeit longwindedly and vaguely, we now offer some tips for paddling Big Water in an our custom SOTAR inflatable kayaks (IKs), the Orange Torpedo.

Likely the defining quality of Big Water is that the speed and force of the currents at play are comparatively greater than those present in non-Big Water, and are often underestimated. What’s more, depending on the riverbed in question, the presence of Big Water on a given river usually makes for an altogether wider, swollen river body relative to the banks (wider/longer rapid tongues, elongated and exaggerated currents, etc.). As such, you need to focus on anticipating where you need to be ahead of time and start making for your move early—before you get there.

Once you’ve set your line and are in position, set your will and be aggressive. Big Water is usually more powerful than it looks—especially in cases of lateral moves (crossing currents) and breaking waves. As such, you’re generally better off overestimating current strength and speed and hitting a mark in your line early than you are holding back and missing it entirely. So don’t hold back; don’t let yourself drift into the rapid/drop; don’t pull the Rollercoaster move and stop paddling! Speed is your friend, hesitance your enemy.

When your inflatable kayak takes on water, you lose speed, control and maneuverability by degree. As such, one of your goals when paddling Big Water rapids should be to limit—to the extent possible—water from filling up your kayak. One strategy toward this end is to follow the Greenwater Road. The Greenwater Road (as it is ostensibly so-called only in this write-up) is marked by flatter and comparatively more solid appearing lanes of current. It often runs through the low points between Big Waves and can also be identified by contrast to turbulent—aerated, frothy-white, sometimes recirculating—water. Following the Road will help keep excess water out of your kayak and augment your relative momentum, which will in turn bolster your stability and maneuverability. With all of that said, this so-called Greenwater Road often merges into powerful, turbulent lateral waves and culminates in non-greenwater hydraulics. So, following the Greenwater Road is a good strategy to follow, but should not be confused for a sneak-all route through big rapids.

Whether it be a train-wave, lateral-wave, hole, boil, concussion-wave—whatever—lining up to these features head-on (at a 90-degree angle) is an all-important strategy, as hitting these aforementioned features sideways, or off-angle can easily flip an inflatable kayak. Should you somehow find yourself turned sideways in your IK, your goal should be to straighten out your kayak. However, if you are not—or until you are—able to do so, it’s important to lean downstream. By leaning downstream, you load your kayaks’ downstream edge, thus limiting the amount of surface area on your upstream edge (i.e., tube or side) exposed and subject to the downstream current, which will serve to prevent said downstream current from grabbing your upstream tube and flipping you over.

Arguably the most fun feature of Big Water are the big waves that it accompanies. “Big” is an awfully relative term, but for our purposes here, one way to think of a “big wave” is as one, which, if measured from trough to crest, would exceed the total length of the craft in question, in this case, an Orange Torpedo Inflatable Kayak (~10 feet in length). Another way to think of it is this: if while at the trough of or while paddling up a wave you cannot see beyond it downstream, then you’re dealing with a big wave. Having said that, as with the aforementioned qualification of Big Water, you’ll know big waves when you face them—and when you do, it’s crucial that you paddle up-and-over them. Current(s) accelerate into the toughs and up the faces of big waves, and in order to maintain control, you need to match that increased speed by creating and maintaining your own relative momentum. Leaning forward will help you increase your own momentum and keep you on line by giving the downstream current more purchase on the front hull of your boat and less on the stern; keeping loose hips will allow you to make minute adjustments instead of overcorrections, and; most importantly, taking well-placed, strong paddle strokes will allow you to harness the momentum you need to stay in control, on-line (at a perpendicular angle!) and in your boat as you’re climbing up big wave faces. Finally, by maintaining control as you move into, up and over big waves, you allow yourself the chance to glimpse what’s downstream before dropping into the next trough. Priority time for paddling is always in the bottom of wave troughs.  The water is moving fastest downstream in the bottom between waves. This gives your paddle the most to bite and gives you the most power out of your strokes.  As you climb up waves, the surface current slows to point where it has actually turned and is going upstream at the top of most big waves.  This gives your paddle very little to pull against. So to maintain that important downstream momentum, time those paddle strokes to make sure you get some in the bottom of the waves.

If you like the sound of what's written here and want to give some Big Waves a go this coming summer, consider signing up for an early Main or Lower Salmon River Trip or the May 23rd Klamath Hotshot Season Starter.