This Is My World! 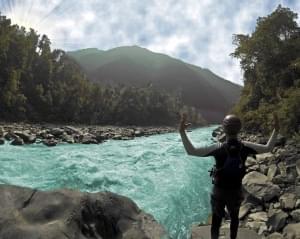 For years now, I’ve spent my summers in truly awe inspiring places–fantastically beautiful, grand, remote and dynamic. More than that, I’ve spent them doing something I love: running rivers. Most days I manage to appreciate this fact for the blessing it is. Some days, though, when I’m tired and sore and the morning is cold and the work to be done seems to run with infinitude ahead of me, I misplace my gratitude. My little big epiphany, as I’ve come to think of it, came on just such a morning.

It was the second morning of a five-day Main Salmon trip. I was fixing breakfast with the other guides, speaking only when necessary, going through the—as we always do—motions of the morning. Save several early risers, all of the guests had yet to emerge from the tents we had set up against the rain of the previous night. With a new batch of coffee on its way, I set off across the large flat of our camp, through where all of the dew heavy tents drooped, toward the camp common area. As I passed the last tent, the front flap opened and out bounced Asher, and with his emergence, my little big epiphany.

Free of the tent, his face burst into life. I recall his expression as ineffably wondrous, like someone looking at the face of god or something. He spread his little arms as wide as they would and rotated slowly on his own axis, as though trying to embrace the whole world. As he did so, he sounded out in his small, bright voice.

“Ohhh!” he exclaimed, to everything and nothing, everyone and no one.

I was rooted, staring dumbly at him as he spun. In hindsight, I guess I didn’t know what I was seeing. His ebullience took me off guard. The sight moved me uncharacteristically—immediately and physically. As naturally as he’d begun he stopped, then scampered off to wake his parents, I can only assume to tell them the great news. Meanwhile, I still stood staring dumbly ahead.

Then, all at once, the force of it hit me and I felt a madman’s smile spread across my face. I thought I might cry for a tick, but the too-full feeling in my chest gave way to laughter instead. How amazing, I thought. How simple. I felt on the brink of remembering something big and good and bright that I felt I’d always known but couldn’t quite recall, like the details of a thing or face from childhood.

Though the singularity and resonance of what I had just witnessed would have affected me regardless of its author, the effect was heightened, I think, by what I knew of Asher’s life. Asher was born with a relatively moderate form of TAR Syndrome, which, I had learned from his parents, is a rare genetic disorder characterized by the absence of the radius bone in both forearms as well as a—typically—dramatically reduced platelet count. So it is that at just four years old, he had already undergone multiple serious operations. And yet, it was clear in that moment that Asher’s ostensible misfortune neither weighed down nor jaded his spirit. If anything, the case seemed quite the opposite. In the slow-passing seconds that accompany felt significance, I thought on life’s ubiquitous trade-offs, wondering if such simple wisdom as Asher evinced could be inborn or had to be paid for, albeit unwittingly, with hardship. Is it grace or greatness of mind?  The answer, if there be answers to such questions, I knew to be ultimately irrelevant. Regardless of whence, there was a wisdom here, and something like a truth.

This is my world, I thought, looking around me. There was the clear green river. There were the mountains, and adorning them the red and yellow and ever green-topped pines of Northcentral Idaho. There was the cool air of the river canyon before sun and the familiar scent of hot coffee.

There are moments, though rare, when the entire universe seems thrown into sharp relief. On that morning, I had such a moment, if only for that long. I don’t pass this on as a homily on gratitude. I have no wisdom or enlightened sense (those who know me will back this up). But I do make a point now of reminding myself of that morning and its mantra, and when it feels right, I make a point of sharing the story with others. If it suits you, I hope you do the same.