Want to make your phone a waterproof camera? Now you can | OTT Gear Guide 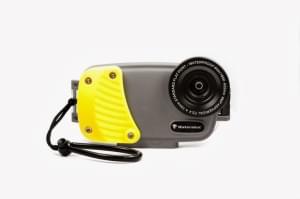 With built in camera phones rapidly replacing conventional point-and-shoots, it was only a matter of time before something like the Watershot (~$90) showed up. This cutting edge removable camera housing (with models available for the iPhone 4 & 5 and the Galaxy S3 & S4) is designed for those who want to take their phone around, on and in the water. With a listed effective depth of ~130 feet, this housing was born to serve and protect.
The phone fits snuggly into the case, features two large interchangeable lenses--one flat and one wide angle--and is operated using four buttons located along the case-bottom, which allow for functions including rapid fire photo capture, front and back camera use, GPS overlays and social media sharing, all with the phone closed safely away from the elements. Finally, the Watershot housing also comes with several tripod mounting holes, making set-up shots a breeze.
Perhaps the only obvious downside to the Watershot is that it does not float. So if you end up getting your hands on one of these, make sure you have a way to secure it to your person before taking it out on the water.
The Watershot is no GoPro, but neither is it trying to be. They are fundamentally different products for essentially similar environments. Where the GoPro stands apart in its facilitation of capturing hands-free action, the Watershot allows for in-hand photo and video capture and on screen previewing, providing the user with more control over what is being captured, and arguably more versatility, than one might have with the mounted (previewless) setup of the GoPro. (The ultimate solution to water-environment photo and video capture would obviously combine something like the Watershot with something like the GoPro.)
All in all, the Watershot is an awesome new product that could be perfect on your next rafting trip, say on the Rogue River.
(If you happen to own one of these, or else have tried one out, we’d love to know your thoughts. Sharing is Caring.)