OTT Outdoor Adventure Reads: Anything Worth Doing by Jo Deurbrouck 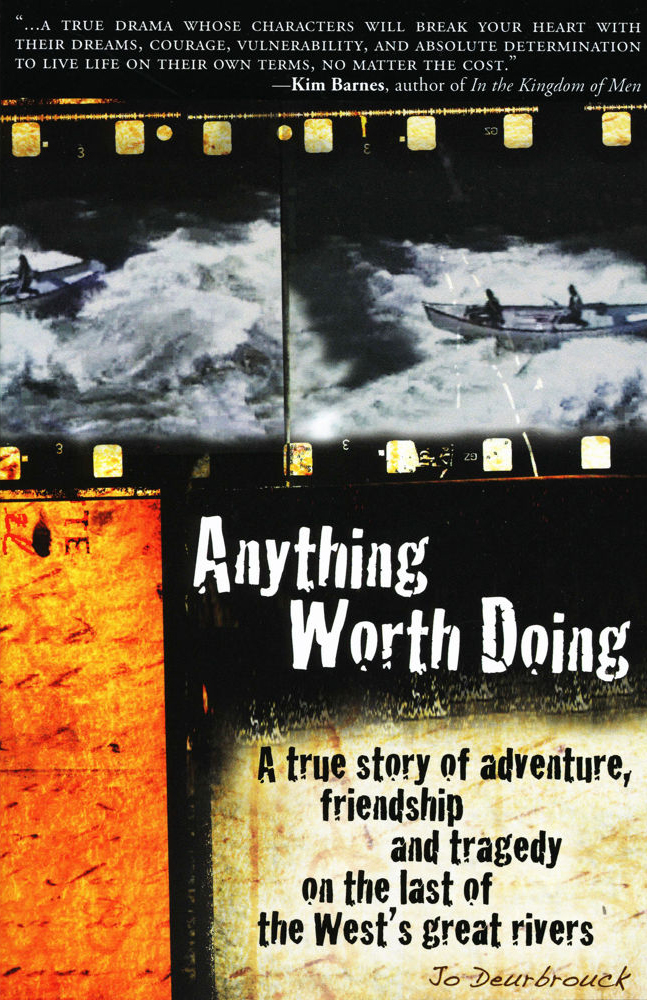 A True Story of Adventure, Friendship and Tragedy on the incredible Salmon River

In her 2012 National Outdoor Book Award winner Anything Worth Doing, Jo Deurbrouck tells the story of the famed Idahoan boatman Clancy Reece and his protégé Jon Barker, “two men who share a love of wild rivers and an unbending will to live life on their terms, no matter the cost.” (Deurbrouck, Preface, Anything Worth Doing)
Beginning with what the two called the “Source to Sea” (a 900 mile descent from the headwaters of the Salmon down the Snake and the Columbia to the Pacific Ocean) on to what the two would call the “Five-by-Five” (floating five 100-mile sections of Idahoan whitewater in five consecutive days), Reece and Barker fatefully determine to set a 24-hour downriver speed record at extreme high water on Idaho’s Salmon River. Though they have no way of knowing it at the time, this challenge will be their last undertaken together.
That Clancy Reece will die in the course of the attempted record-setting descent is revealed at the outset of the book and reiterated throughout. But this tragic end should not otherwise surprise the reader. For the story of these two men—and in particular Clancy Reece—is a hubristic story, and such stories rarely run through without tragedy.
In the preface to the book, author Jo Deurbrouck writes that she wanted to write Anything Worth Doing in part because she was interested in the question of whether her main subject, Clancy Reece, would have made different life decisions if he could have foreseen their outcomes. Hence beyond being a biopic narrative, Anything Worth Doing is a story about the reasons we make the choices we make.  It is a story about choice and chance, and we as readers are ultimately led to consider whether the greater danger lies in living as Clancy Reese lived or how he did not live?
The risks of living as Reece did not have mostly to do with intangibles—the soul, the will or what have you. In living as Reece did not, we risk forgoing or forgetting our passions for the promise of the safe—steady incomes and sterile, soft-edged workspaces. We risk finding only half measures of ourselves, pushing only so far as is comfortable or commonplace. Clancy’s famous adage, echoed throughout the book as throughout his life, “anything worth doing is worth overdoing,” reflects this tension, and implicitly begs the question—not ‘how far is too far?’ but rather—‘what is the point of a life defined by limits?’ For Reece, a purist and a romantic, whose life was of, on, about and for the river, such limits were one part illusion and one part trap.
The risks of living as Reece lived, on the other hand, have mostly to do with tangible aspects—the practical, the physical. He was poor, uninsured, without retirement or prospect of a post-guiding career. He lived for rivers, for the running of them. He lived absolutely; found purpose in pushing himself and testing his limits. For Reece and those like him, the risks boil down to eventual poverty, physical injury and accidental death.
In final review, Deurbrouck’s Anything Worth Doing is a story of passion and defiance in the face of all odds, for the sake of passion and for the sake of defiance in the face of all odds. “It’s a true story about two larger-than-life whitewater raft guides in the wilderness state of Idaho…who loved a river so much, they had to run that river in ways that rendered it uniquely theirs. The things they did look crazy, but their reasons were simple, beautiful, and universal. It’s about their journeys, their lives and the price they pay to live their dreams.” (Deurbrouck)
It’s an OTT Outdoor Adventure Must Read.